<< Ask something else
Changes? Additions? Rewrite?
Comment or Cast an email >>
The mouth speaks!

Skara Brae is the central town around which the Bard's Tale series (primarily Tales of the Unknown and Thief of Fate) hinges.

The adventurers were first introduced to this legendary town in Bard's Tale 11, when it was the center of an evil spell cast by the wizard Mangar the Dark, who surrounded it with a spell of eternal winter. The heroes then found themselves on a journey that would challenge them to save the town from his control.

Other adventurers had attempted to defeat Mangar and free Skara Brae, but failed -- Knights such as Lord Garrick, viscount of Skara Brae's sister city Hamelon, who reached Mangar's chamber with a dwindling party of warriors, but was woefully unprepared for the final challenge. Garrick had marvelled at the town of Skara Brae, and its dungeons and complexs, noting in his journal: "Was Skara Brae perchance built over the ruins of an ancient single complex, the like of which does not now exist, save in the minds of men?"2

After the latest heroes defeated Mangar, Skara Brae remained safe and peaceful, for a time. While the heroes were off on other quests, Mangar's master, the Mad God Tarjan, returned for vengeance - Skara Brae's destruction was just the beginning of his reign of terror. This is the setting for Bard's Tale 3, when the heroes return to the ruins of Skara Brae3 from the wilderness.

The Tale of Skara Brae (part 1)

Sung by the bard gracing the introductory screen of BT1:


The song I sing will tell the tale of a cold and wintery day,
When evil fled and brave men bled the Dark One came to stay.

Of castle walls and torchlit halls and a price men had to pay.
Till men of old for blood and gold had rescued Skara Brae!


The Legend of Skara Brae

Long ago, when magic still prevailed, the evil wizard Mangar the Dark threatened a small but harmonious country town called Skara Brae. Evil creatures oozed into Skara Brae and joined his shadow domain. Mangar froze the surrounding lands with a spell of Eternal Winter, totally isolating Skara Brae from any possible help. Then, one night the town militiamen all disappeared.

The future of Skara Brae hung in the balance. And who was left to resist? Only a handful of unproven young Warriors, junior Magic Users, a couple of Bards barely old enough to drink, and some out of work Rogues.

You are there. You are the leader of this ragtag group of freedom fighters. Luckily you have a Bard with you to sing your glories, if you survive. For this is the stuff of legends. And so the story begins...

After a time of peace with the defeat of Mangar, a new and more ominous terror returned to exact his vengeance. Sung by the bard gracing the introductory screen of BT3:


Come hear the tale of Skara Brae: A god returned to have his way.
Creatures of darkness, spawn of night, the Mad One's kin destroyed the site.

Defenders fell, their bane come true, Garth, Roscoe, Kylearan, too!
As doom approached, the helpless fled. It did no good, the streets ran red.

Survivors few, they sit and mope, with but one final ray of hope:
'Cross time and space, the legends say, heroes at last! To steal the day!

This letter from an anonymous source was left for someone to discover4, calling for the aid and return of the heroes who had previously saved Skara Brae from the clutches of Mangar:

I pray my body does not fail me before I am able to complete this most important missive. I pray as well that, somehow, the heroes who once before saved Skara Brae will find this accounting and act upon it. I leave this record so those who come after will know what horrors that the Mad God Tarjan has perpetrated, and so that they will not be lulled into believing that Skara Brae was his sole target.

How can I describe that day. Nay, it did not begin like all others, for on that day we celebrated the victory over Mangar that had so recently liberated our city. Bards from the world over arrived in Skara Brae to play and herald the brave deeds of those heroes who saved us. The townspeople danced in the streets with happiness, and the great festival filled all with an overwhelming joy of life and renewed hope for the future.

Then Mangar's Master, The Mad God Tarjan, arrived to reduce our day of celebration into a day of mourning. His shadow sank the city into pitiless black oblivion. Foul creatures that had festered in his flesh like maggots burst forth to assault fair Skara Brae. People ran, but could not run swiftly enough to escape. Tarjan's minions left none untouched.

Forgive the shakiness of my script, for life ebbs painfully from my body as I write. Tarjan, mocking my death curse, told me Skara Brae was merely one in a series of conquests he had long contemplated to complete his revenge. He laughed when I said heroes would come to destroy his mad plan, yet I sensed fear in his voice when I promised that the legendary Hawkslayer, and those who defeated Mangar, would return again to triumph. As payment for my threat, he gave a swift twist of his jewelled sword into my belly.

Tarjan must be stopped. Whosoever reads this, you must get word to the heroes. This will be their greatest challenge, for upon their efforts rests the fate of more than Skara Brae, more than the Six Cities of the plains. Their failure will mean the extinction of all life - save for the wretched Tarjan and his servile parasites. Pray for success... and life renewed. 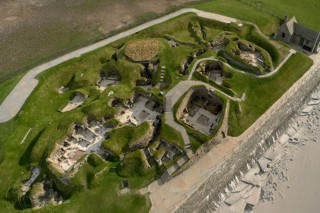 Skara Brae from above(src)
In reality, Skara Brae is an ancient village located on the Bay of Skaill on the west coast of Mainland in Orkney, Scotland. It bears very little resemblance to its representations in Bard's Tale, but holds significant historic value.

While in the initial stages of planning for Bard's Tale 4, Brian Fargo of inXile Entertainment visited Skara Brae to research in person much of its history, and Scottish culture and legends for inspiration (and incorporation) into Bard's Tale 4's lore and storyline.

Other pages that link here:

Map clue: harkyn3-2
Reveal the clue
Map: [Harkyn's Castle 3]
"An old statue of a fifteen foot tall warrior stands before you. Will you:"
[A]pproach it
Approaching the statue, you need the Eye which is found in Catacombs 3:

Pass your request over to the intelligent and wise Google Mouth
There may yet be unconnected mentions of your desired lore topic not yet documented or linked on the above pages. To be absolutely sure, visit the Google Mouth and heed its response! It knows all things... on this website.